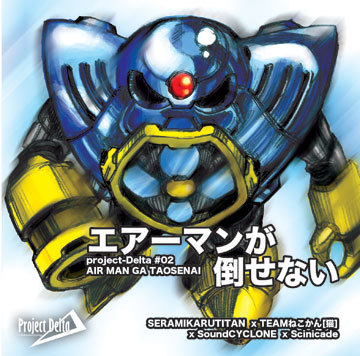 Everyone who has ever played a Megaman game knows the frustration level that is the ENTIRE GAME!!! Let’s face it, Megaman is a series that leaves you no room for failure, and almost always you will eventually find a boss that will be the bane of your existence.

Fortunate for you, to help you push through the hard times we’ve found an amazing song from Japan that will help you persevere through all the pain and strife.

エアーマンが倒せない (Air Man ga Taosenai, or can’t beat Air Man) is a rocking tune first posted on Nico Nico Douga, and covered by Team.Nekokan. It features an epic guitar track that commands your head to bang, a singer with a stunning falsetto, and a steady drumbeat. It’s easy to see how this hardcore ditty will get stuck in your head for days.

The lyrics encapsulate every feeling a gamer has when playing Megaman, mainly the “DEAR GOD DON’T DIE…NOOOOOOOO!!!! *tear*…” moments that you’d get when challenging Dr. Wily’s robot masters.

This video takes you through the trials you face on Air Man and Wood Man’s stages, and provides a musical representation of a gamer’s plight which any one of us has suffered at on point or another. The running, the jumping, the dying, it’s all here and paints a cool visual picture.

I especially love the music video for the Japanese version on youtube. It’s really funny and uses a combination of sprites from the game and digital illustrations, and it ends up being the perfect outlet for the song. Not surprisingly, there are already some English language covers out there that are less entertaining.

The music on the American cover is the same, but it’s obviously sung by an amateur, so it’s not of the highest quality. I will say that the American cover does do a decent job of translating the lyrics into English without butchering the original feel of the song. Frankly, If you ever find yourself singing this tune you will probably do it with the English fan lyrics, so I can’t hate on the dubs so much (except the screamo version).

Oddly enough, while listening to this ballad chronicling the suffering of Megaman gamers, I find myself getting inspired. I start to feel confident again in taking on any Megaman. This track makes me feel like I could take on the whole Wily empire by myself. Heck, I can fire this song up anytime and be completely ready for getting my ass kicked, minus the part were I cry and give up in vain.