So last weekend my roommate and I decided to host an event that we are terming, “Shitty Movie Night”.  It’s really nothing but an excuse to have friends over, consume too much alcohol (I put down 12 beers that night and could have kept going) and laugh at the horrible movies that some people like to make.  But not to completely fuck people over, we decided to do two shitty movies and one decent movie at the end.  I’m not sure which I heard more, groaning, laughter or crying as people realized that I really do have a talent for picking horrible movies if I want to.

So let’s get into it, shall we?

The first movie that I forced people to watch was directed by none other than our favorite movie director, Uwe Boll.  This movie didn’t know what it was.  Was it a video game movie, or a comedy or an action flick?  It falls somewhere in between as there were a few funny moments and there were some action scenes.  Uwe Boll even got into a fistfight with some game developer over his movie adaptation of the man’s game.  I can’t even remember what the game was now.

The movie follows the really crappy day of a Joe Schmoe character.  I won’t go into the details because, let’s be honest.  It’s a Uwe Boll film. It sucked.  The plot was barely put together and was all really an excuse to a buildup where the Postal Dude character literally goes, well, postal.  He unleashes death and destruction on the whole town while trying to steal some rather valuable goodies and ends up fighting terrorists also.

Bad bad bad.  This movie tries to shock you into laughing by doing things such as running over babies, shooting children and chinese women.  While sometimes it worked, most of the time it was over the top that it just felt retarded.

If you thought In the Name of the King was bad, wait till you watch this one.  Or take my advice and don’t watch it.

The second film was the aptly named, Stupid Teenagers Must Die and boy does it live up to its title.  This film was shot in the style of the Blair Witch Project.  Some kid with an $800 camera and some cheap sound equipment got some friends/hookers together and made a movie. I think it’s supposed to be making fun of old 80’s horror films but it fails miserably.

The plot was shit.  Supposedly a group of stupid teens get together at a house to put on a seance.  This ritual was supposed to bring up the spirit of Murderer McGee (what a great name) while the teens played games in the houses.  It was supposed to be all in good fun until one of them turns up dead. Just pure, grade-a cow shit.  It wasn’t even funny for 90% of the movie.  It was just BAD.   The best parts were when the nerds got involved and actually understood what was going on, unlike all the jocks, tough guys, bimbos, lipstick lesbians and goths.

Now I know this movie wasn’t supposed to be taken seriously, but you would have thought that after watching this mess of a movie, the creators would have decided, “You know, all this does is make us all look like fuck-tards.  Let’s just throw this thing away and try to forget we ever made it.”  But no, they released it for the entire world to see and now I’m making fun of them on the internet.  See what happens when you think you’re Spielberg?  Go back to flipping hamburgers you losers. 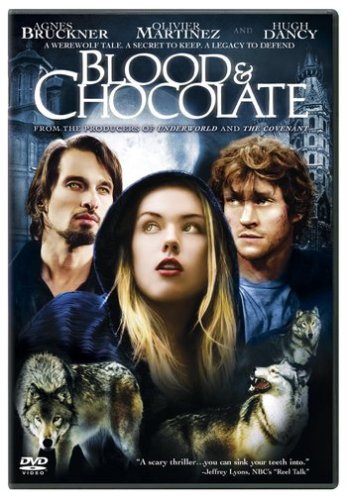 Finally the last film of the evening.  I had been under the assumption that Blood and Chocolate was about a female werewolf that was torn between a vampire and a werewolf in a classic gothic lover’s triangle.  I was sadly mistaken.  In fact Blood and Chocolate has nothing to do with vampires at all.  It is about a female werewolf that loves a human and hates herself for what she is and her struggle with her cousin, her guilt over her family’s death, and her dislike for the leader of the pack, Gabriel, an alpha wolf that wants to mate with her.

You should be able to tell what kind of movie this is going to be from the start.  Boring and to be honest, we had all drank too much by that point and were talking more than watching the movie.  On a positive note they did show people drinking a lot of Absynthe.  It doesn’t taste as good as they made it look in the movie, btw.

The last disappointment with this film was the werewolves themselves.  When I think werewolf I think of a creature somewhere between man and wolf.  Now that might not be the correct interpretation of the legend, but it’s what I imagine.  This movie probably stayed closer to the actual legends because when they transformed they became wolves.  Not some large, terrifying creature, just an average looking wolf.  Disappointing.

So anyways, there’s a quick look at the three movies we watched.  Hopefully the next time we do this I’ll be able to give you a more accurate or more entertaining look at the shitty movies me and my drunk friends like to watch.  Stay classy internet and fuck off.