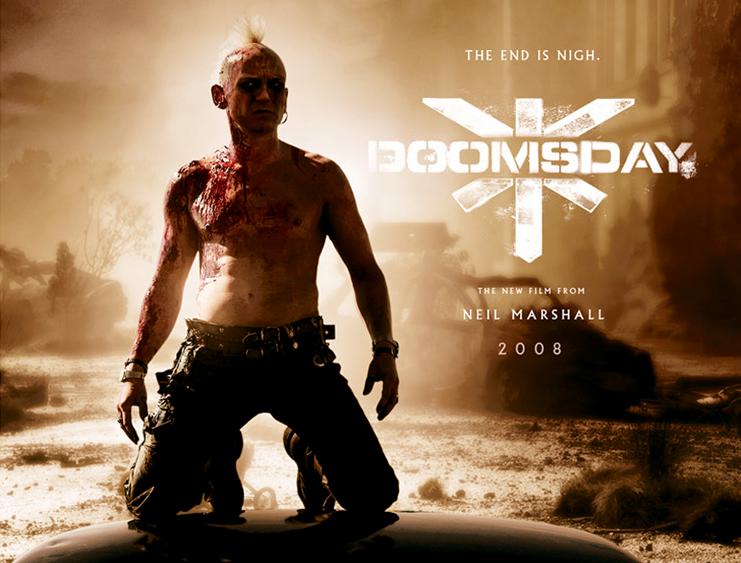 Last night my roommate got stood up. He made plans with a girl to watch some scary movies, went out and rented said movies, and then ended up having the girl cancel on him. Sucks for him, let me tell you. But out of this slight tragedy, we were saved by two things. The first being my other roommate’s hot cousin and the second being the movie he picked out, Doomsday.

Now while I won’t say Doomsday does anything new for the action/female badass/human-killing virus genre, what it does do is entertain the viewer most of the time, completely disgust them at a couple of points and throw them curveballs every 20 minutes or so. Read on to hear the details.

Doomsday’s plot reads like a dish of copy pasta from the Resident Evil series and the Fifth Element. The basic summary is that ANOTHER nation destroying virus, this time called Reaper, has been unleashed upon England. Rather than have the entire country be destroyed, they decide to just seal off Scotland with a giant wall and let the silly Scots deal with it. I mean, no one likes the Scottish anyways right?

Fast forward 30 years and now we have an outbreak of Reaper again, this time in London. Also at the same time as the outbreak, survivors are found in Glasgow, something that wasn’t supposed to be possible. So of course a team of scientists/SWAT members are sent in to investigate and to try and find the cure that they believe is developed by a Dr. Kane. What follows is a nightmare journey through hell…..or at least it starts out that way.

Without spoiling the movie too much, let me say that for the first 30 minutes when the team crosses the wall, it’s exactly what I expected. A gruesome, brutal, post-apocalyptic, dog-eat-dog world that Scotland has become. Think Mad Max, but with updated special effects.

But then, halfway through the ‘Over-the-Wall’ part, the movie throws a curveball that is hard to understand and really, detracts from where the movie was headed. I’m not sure if the movie twist was really necessary. It was neat to think about, but really disrupted the idea that the entire country of Scotland had gone straight to hell.

So enough of that, on to the actors. Eden Sinclair is played by Rhona Mitra, who is seriously a cross between Mila and Angelina. Don’t believe me? She does an adequate job at the part. I mean, a gun-toting, sex-starved, one-eyed cop isn’t that hard to play right? Her most recent credits include Shooter and The Number 23. Other than that, nothing of real importance.

The rest of the cast of Doomsday is refreshingly free of A list actors, a phenomenon that sometimes makes the movie better. These B-list actors include Bob Hoskins(Smee from Hook and Bart from Unleashed) as the Chief of Police, Bill Nelson , David O’Hara as Michael Canaris(the crazy Irishman in Braveheart), Alexander Siddig as Prime Minister Hatcher(Ajay in Reign of Fire, Nasir in Kingdom of Heaven, best known as Dr. Bashir from Deep Space Nine), and Malcolm McDowell as Marcus Kane(Mr. Linderman in Heroes, best known for Dr. Tolian Soran in Star Trek: Generations). Hoskins and McDowell turn in their usual good performances and I enjoyed the scenes with either one of them. I really wish they both made it into more mainstream movies.

Anyways, the movie was fun to watch, if a little loopy at some points, but it isn’t for the sensitive subject. This is a gory movie, something in which I can usually handle in most cases. But one scene literally stopped me from eating my delicious chocolate chip cookies for a few minutes. In case you hadn’t heard, the Mad Max characters are cannibals…..and we’ll leave it at that.

I enjoyed watching this film. It felt very campy and almost like a B film, in some ways paying tribute to older films like Road Warrior. I just wish they had left out the guys in the castle.

So to sum up, if you enjoyed any of the RE movies or Fifth Element, Doomsday will probably appeal to you. It’s also a fun action movie, if a little stupid at times so the action film fans will probably enjoy it too. Just remember to have fun with it and not judge it too harshly.