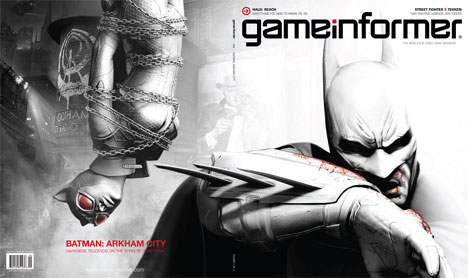 Another month, another big game reveal brought to us by the silly people over at Game Informer. While I have my own personal reasons for disliking Game Informer, I must give it to them; they are golden at nabbing exclusives for the public. This upcoming month cover story is the sequel to the stupendous title Batman Arkham Asylum, know as Batman Arkham city. 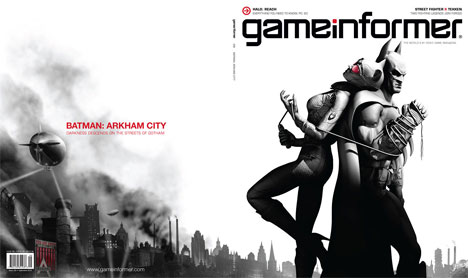 The cover has revealed that Cat woman would be a main villainess in the upcoming title which is really exciting. While we won’t have more information until later, think how cool it would be to have a chase scene spanning across Gotham cities rooftops, or what if she’s even a playable character? Well we will find out these things in time, but they’re something neat to muse on.

Also something to think about is the fact that the cover of the magazine is primarily using the color white, could this mean the next title could feature day time missions? Who knows, but day time isn’t exactly what I think of when I think of batman. (Well maybe if he is trying to get rid of a bomb…) It might be a style thing for the cover, but I wouldn’t count it out especially since batman has an entire city to clean up, which could be hard to do in one night. (Although he is Batman so I wouldn’t count it out.)

It will be interesting to see how the Arkham Asylum formula might translate to a more open world environment. Arkhams battle/stealth grounds where really closed in and tightly designed, so much so that to an extent you could consider the correct way of solving a room may be rather formulaic. To have this formula be thrown off by potentially shifting into an open world environment will be a test of character to Rocksteady Studios. However I wouldn’t rule out small corridor like levels set on the street, to emulate the original feel of the first game.

My Excitement is piqued at the possibilities of this new title. I thoroughly enjoyed the first and I would love to spend some more time in that world. Look for Batman Arkham City in stores next fall.

*This is Mark Hamill’s last performance as the Joker. I grew up with him as the Joker, I loved the Batman Animated series, it seems sad that this might be the last we hear of his joker. Good Night Sweet Prince…
*No. you need to watch the animated series from the 90’s like now
*I loved the theme from the 90’s version, its pure batman.
*Hopefully the catwoman fight will be better that dodge roll, throw batrang, about 50 times, while avoiding vines.