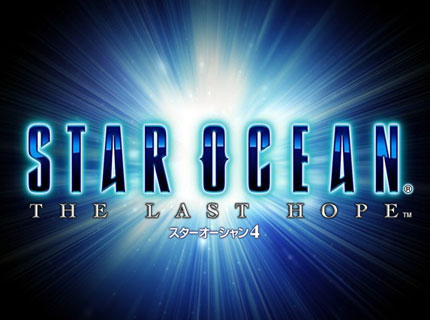 I have mentioned that I have lost my faith in the JRPG on RLR a few times but I haven’t really written anything about it yet. In fact, I had written JRPGs off to a large degree after the last few attempts at them ended in abject failure and boredom. I’m not sure why this has happened since I love and adore all of my SNES and PS1 JRPGs. Whether it’s the battle system or the characters or even the story, JRPGs had become an old and fading genre of games for me.

Until I met Edge Maverick and the crew of the Calnus that is.

You see, I have been hearing some mixed thoughts on this iteration of the Star Ocean series. Some like it, some don’t, and I know there are more RPG fans out there like me that maybe are fed up with JRPGs and the entire stagnant genre. Either that or maybe you are just on the fence about it. This isn’t really a review of the game, it’s been out too long for that, but after getting to spend 10+ hours in the world of Star Ocean, I just wanted to give my opinion on it and why it has revived my faith in JRPGs…at least a little bit.

Keep in mind the last Star Ocean game I played was Second Story so I’m not sure what changed happened between SO2, SO3, and this one. I’m going to hit each part of the game that I love and each part that I don’t. Like I said, this isn’t a review, so don’t go scanning straight to the bottom looking for a number. You won’t find it.

The story goes like this. You are Edge Maverick(a name definitely chosen to appeal to western players), a cocky, young but talented pilot that has been chosen for the first deep space exploration and reconnaissance mission from Earth. Nuclear holocaust has come to our world but thankfully you are spared all the drudging details of that. Only know that people are living underground now and barely able to survive. Your ship, the Calnus, along with 4 others, are assigned the mission to explore new planets for colonization. Unfortunately, on your first warp jump to the first planet on the list, your entire squadron has an accident and are forced to make a crash landing on the target planet. While the story is nothing incredibly fancy or complicated, it does create a decent setting for you to start your adventure. You are eventually rescued by a friendly alien race and your team, consisting of you, your friend Reime, and an alien named Faize, are given the now repaired Calnus so your mission of exploration can continue.

I have only been able to play a small fraction of this story, but I have always been a sucker for Sci-Fi based games, so this appeals to me. Sure, it’s nothing too complicated, but yet has enough substance to draw you in and give you purpose as you travel from place to place.

I understand how people could become bored with it after the first 10 hours, since the first hour is spent watching cutscenes (I’m not kidding either…My god those things were long!). I assume, since I haven’t played the entire game, that the story will continue with the traditional JRPG cliches. You know, like traveling from place to place and adding random people to your party that find their own reason to join up.

This feels just like a classic JRPG story with a sci-fi setting. It’s classic Star Ocean. I love it.

This part of the game has literally blown me away. Watching battles, cutscenes, traveling around the worlds you visit all in HD on a 47” big screen is amazing. I literally stood in awe at the detail in the environment around me as well as the character models themselves because they never change from overworld to custscene to battle. The artists and designers of this game deserve some major props for making this game one of the most beautiful I have ever played.

Here’s the opening cutscene of the game.

This is another typically strong part of the Star Ocean games. I’m glad to see their item creation system is still going strong, as that is a huge incentive for me to keep exploring and fighting, and then there’s the battle system. I imagine this battle system as a feisty redhead…energetic, crazy, and chaotic but still worth all the effort to control her. Everything I could hope for from a next-gen Star Ocean is here. The changes they have made are good ones and so far have enjoyed myself immensely with the combat, something I had begun to really dread with other JRPGs.

This is kind of a hard thing to put into words. There are moments I really enjoy the characters I’m playing with, and then there are moments that I’m just using them to progress the story. There’s no emotional investment in these characters until after you have completed your initial journey through Lemuris. That’s not a good thing for an RPG ten hours in. Not to mention the original captain of the Calnus looks like a monkey. No joke. He looks like a freaking monkey.

If I could boil it down to one thing that really bugs me about the characters, it’s the voice acting. King3vbo told me it would be horrendous, and while it hasn’t been good, it hasn’t been so bad I want to throw my controller. None of the voices sound right with the characters, AT ALL. Most characters look like children and have adult voices. Faize and Lymle are especially bad, with one being just plain dumb sounding and the other trying to sound like an emotionless child. The script isn’t any help either, but it’s still not a deal breaker for me.

I know I just got done saying I love the battle system, and I do. I love being able to choose whether to attack or not instead of the random battles so many RPGs go with. But there is one thing about it that bugs me and it’s this: I wish more games were like Earthbound. Don’t get me wrong, I liked Earthbound but the best part of that game was watching enemies that were too low in level to harm you, run away, and if you happen to run into one of them, you automatically won. That’s something that I think every game that allows you to choose whether to battle enemies or not should implement. Too bad this one doesn’t, it would really help cut down the monotony.

Other than those two, I haven’t really found any faults in the game.

The above reasons are two of several that have pushed me away from many of the current-gen JRPGs. The last ‘big’ JRPG I tried was Lost Odyssey, a game that is wildly popular among the faithful. But for me, the characters were bland (besides Jansen, love that dude), the story was rather lackluster (again besides the text stories you read of Kaim’s memories. Those were amazing), and the battle system was the same old thing I had played for hundreds of hours.

For some reason the western RPG, with it’s focus on action combat, mature characters and themes as well as adult dialogue, draws me in more. Maybe it’s because I’m getting older and the childish characters and stories of classic JRPGs don’t appeal to me anymore.

I wonder if this, the age of the RPG fan, is affecting RPG sales. The majority of big titles for this gen is, admittedly, FPS, Action or some variation of the two. In other words, kids no longer play RPGs and the companies that still make RPGs haven’t tried anything wildly new in years.

I’m not trying to say Star Ocean has added anything new either, but what I have found that it is an adventure that draws me in. Whether it be from the nostalgia factor of the older games or something else less tangible, I like the game and I plan on buying it as soon as I have the cash.