So yeah, I’m a fairly big Dragon Age fan, I love the game and can’t wait for the sequel. That’s why you wouldn’t believe my surprise when I found out that a new DLC campaign: Golems of Amgarrak was released.
It’s just too bad my surprise DLC turned out to be one of the most challenging and annoying chunks of content I have ever experienced in a BioWare game.

BioWare has always been a developer to favor story telling at all times, so when I state that the story is one of the worst part of the package, you should understand the levity and sheer disappointment packed into those words. That being said the story isn’t bad, but it’s incredibly disappointing that the entire thing is a pathetic chimera of nearly every other dwarven mission in the game. A dwarf asks you to help him find his missing friend/brother/noble house that has traveled into the deep roads in search for a lost Thaig (settlement). They were looking for the power of Golems and how to make new ones, when… OH NO they’ve lost contact and their probably being eaten by some shocking darkspawn monstrosity that: A) eats people’s faces and B) turns them into monsters. Honestly it’s not that bad of a tale, but when you see this exact same outline for several quests including two main quests (one in Origins and one in the expansion Awakening), it loses all effect. A good story isn’t that good when all you do is change a few factoids of something you’ve already feed us, and call it a new tale. By the way this is not a spoiler if you have played Dragon Age before, as this plot has gotten to the point of cliche.

If that wasn’t enough, the method story telling is absolutely anemic, as it’s mainly told through two things; random notebooks you find that spark generic disembodied voice monologues (a.k.a audio tape messages), and through things your party randomly spouts out through game play (which can be impossible to hear if your camera isn’t in the right place, you’re in the middle of casting buffs, or if you advance quick enough to trigger another dialog. Some of the best parts of Dragon Age involve conversation with and responding to characters, so it’s disappointing to see this element is so rarely utilized in this DLC. 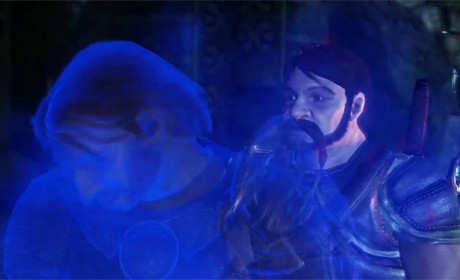 If you have played Dragon Age you should know what to expect in how this mission plays. The core gameplay is still quite good, save for a few class related balancing issues. The issue I have with this DLC is in the layout of the mission, the team you are equipped with, and the gameplay limitations you are beset with.

You’re are given the option to either create a new character for the mission who will start at level 20, or import a character from either Origins or Awakening. However, it’s not advisable to create a new character since you will NOT be prepared for the upcoming slaughter, and if you have a created character from a different campaign it is more than advisable to have had them trained up through the expansion pack, and highly prepared through massive shopping, since there isn’t any merchants in the DLC meaning you’ll be relying solely upon your crafting skills, and all the things in your current inventory.

Your party in the mission is terrible. You’re given a team of a Warrior, a Rogue with the ability to summon a pet rhino, and a weird Red Mage golem thing, and that’s it. Depending on what class your player character is, this group can be either decent, a non-factor, or absurdly hard to work with.

I ran a Warrior class so I got the absurdly hard route. This route results in your party being made up of nothing but frontline attackers, since the golem likes to get up close, the Rogue dual wields swords, and the Warrior uses sword and shield. While there are items that allow you to redistribute points, you can’t buy them in the DLC and you will probably have a barren inventory, making you incapable of equipping your guys with competent weapons.

The difficulty on this mission is nothing short of erratic. In most of the quest you will have no problem getting past anything that dares cross your path and the mission comes off as extremely boring. Then during two specific instances, the difficultly spikes so far off the chart that you feel it might be impossible. The Final Boss in particular is arguably the most difficult fight in the entirety of the game, just because he is so cheap. 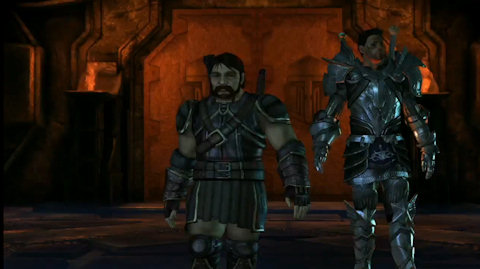 The environment sucks, as the entire dungeon is ripped from all the other dwarven area in the game. While there really isn’t so much you can do with a cave, there is nothing here that makes it stand out, or be at all memorable. While of course this is still the Deep Roads, and a Dwarf city so it would look similar to other areas, there is nothing about the area that feels unique. If I may reference one of the first DLC missions actually bundled with new copies of the game, you travel to a smaller dwarven area, and it had unique imagery, and land marks that actually still stand out in my mind. They looked unique, and nothing about this DLC feels that way. This downloadable content feels like a cop-out, desperately in need of a few new set piece areas.

Frankly, this DLC isn’t worth your time or money. It has nothing new to contribute to the game, where every other content before this has offered a reason to play and experience this. There is nothing of value here. There is nothing but frustration and death, stay far away from this one.

Notes
* I still am not sure about dwarves without beards.
* BioWare really needs to step it up in their facial designs; I am tired of seeing the exact same people over and over again, just because they are too cheap to work outside of their character creator, to create unique hairstyles and faces.
* You may think I’m only hating on this DLC because it’s hard, but I’m not. It had nothing new to offer, and it’s fucking boring. The difficultly merely compounded that hatred. I wouldn’t have minded the difficulty if the DLC wasn’t shit.