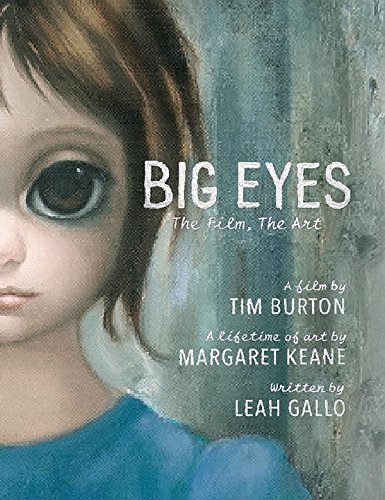 Big Eyes: The Film, The Art

This a coffee-table book that you will actually want to read.  In fact, this particular book has occupied my beside-table for several weeks now.  I only find the book difficult to read as the photographs and artwork constantly distracted me.  The book chronicles the development and making of the Tim Burton film Big Eyes, with a focus on the artwork, and art design used in the film.  Written by Leah Gallo the vivid detail and description of the production lead the reader on a journey from concept to the screen.  Elegantly bridging the gap between the real Margret Keane and the Margret Keane, we see in the film.

Of the 192 pages, about 83 pages are devoted to Margaret Keane’s artwork, displaying over 40 original pieces.  High quality photographs of the production occupy the 109 remaining pages devoted to the film.  Beginning with a forward by Tim Burton, the book begins with the history behind Kean, and the strange story of Walter and Margaret.  The history behind the film is simply fascinating, and the journey this story took to arrive in the theaters is nothing short of dramatic in and of itself.  Leah Gallo begins in the 1960s pop-art craze that saw Keane become a phenomenon.  The story continues along the path seen in the film, and extends beyond the 1986 trial that concluded the film.  This is capped off with a story told by Singer Matthew Sweet, who acted as a consultant on the film, about meeting Walter Keane in the late 90s, who was still taking credit for, and selling, the original paintings.

With this historical background, established Gallo begins to escort us through the process screenwriters Scott Alexander and Larry Karaszewski took in developing the screenplay.  Their journey began in 2003 when they discovered the story, and became instantly fascinated.  Gallo outlined this process in detail from the preparation to convince Margaret to agree to the film, to finding a way to tone down Walter’s real life exploits for the film to make them believable.  Karaszewski likened the actual transcripts from the Keane trail to a Marx Brothers movie.  It was not until 2010 that they approached Burton.  Tim Burton, already a fan of Keane, and familiar with the story, did not hesitate to take up the project.  This is where Gallo leads us to the next phase of the production, where Burton, Karaszewski, and Alexander are finally able to break ground on production.

The documentarian way Gallo presents the film production is amazing.  While more detail could be spared on the technical merits of producing this film, I believe I am only one of the few that would relish those details along with the vivid narrative provided.  Through the next several chapters, it feels as though you are sitting in the same room with these filmmakers as they recount the details of the making of this film for you personally.  It feels like Gallo spoke with every last person involved in this film, honestly I would not be surprised to discover that she had.  Now we are 50 pages into this book and the details of the production design and visual aesthetic have come up.  This is where the book truly shines.  That shouldn’t be surprising, as this is a book about the art of a film about art.  All told, each page of this book packs a punch, either visually, or with captivating writing of Leah Gallo.  It is a book art and film lovers will adore.