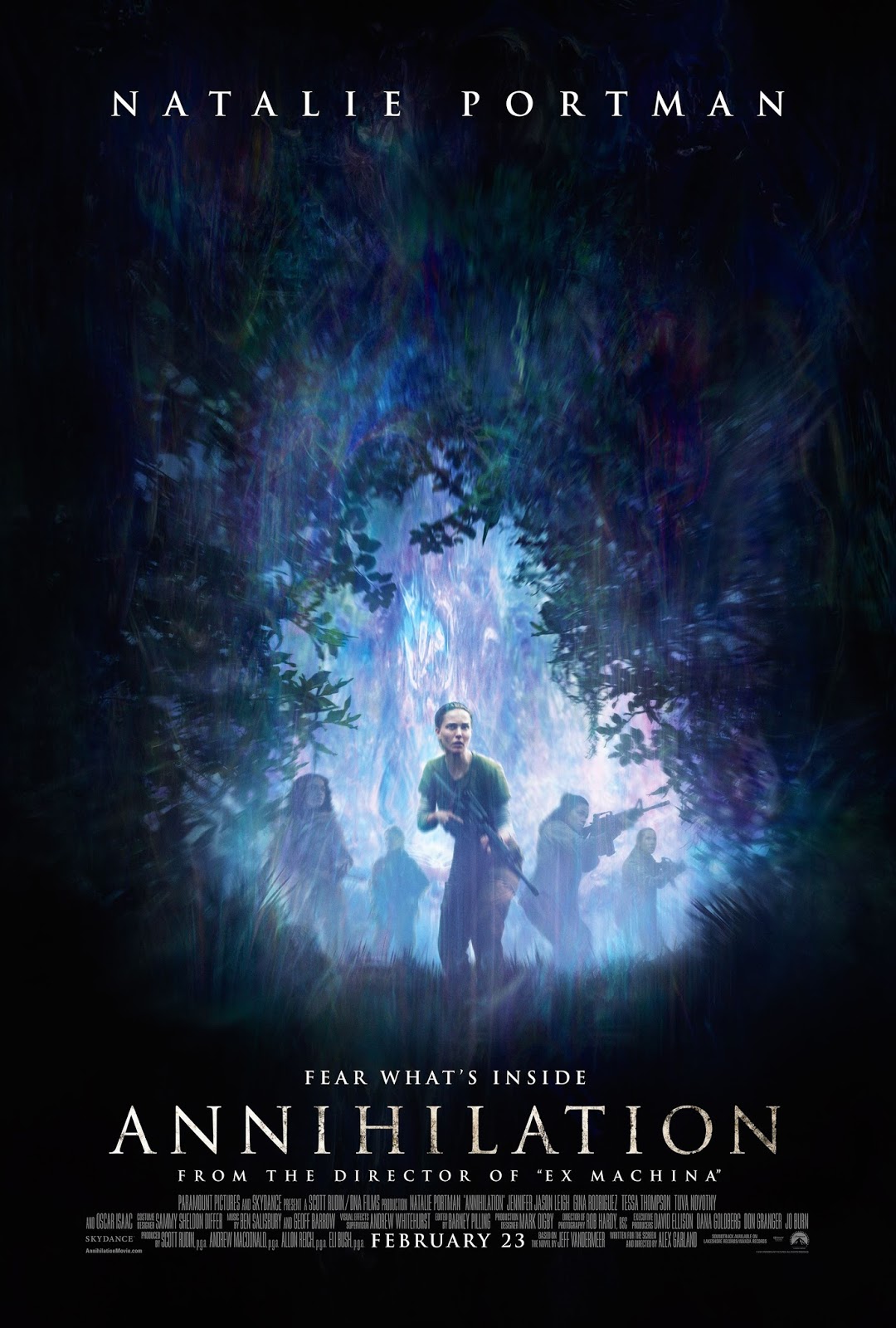 A group of soldiers enters an environmental disaster zone and only one soldier (Oscar Isaac) comes back out alive, though he is grievously injured. In an attempt to save his life, his wife Lena (Natalie Portman), a biologist, volunteers for another expedition into the zone to figure out what happened to him, but does not find what she’s expecting.

Because I am going to spend significant amount of time talking about how great Annihilation is I am going to start by saying it is not perfect.  At least with a single viewing I am not convinced that some things I saw that did not fit, did not fit intentionally.  Since I cannot determine if they were misfires, mistakes, or deliberate, I will address them as if they were flaws.  I will also say that this film may be extremely divisive, I believe that is all right given the subjective nature of the medium, but I also believe anyone that dislikes the movie would agree that it is, or at least approaches the level of a masterpiece.  I will also say that the physical response I experienced was significant enough that I was concerned for several hours after the film ended that I had come down with the flu during the film, I did not, it just took some time for my equilibrium to return, and my body to relax.

As I said, there are some things I feel did not land or fit with the nature of the film and narrative.  Please forgive the vague pronoun type game, I do not want to potentially spoil anything.  The film centers around a mysterious event they call The Shimmer.  The military and scientists have struggled and failed to collect any information from inside the event.  In the beginning of the film I was extremely frustrated at the lack of exposition, and the seemingly too covenant McGuffins.  Such as, there is absolutely no mention of any attempts to use drones, or remote vehicles to explore The Shimmer, or why was no approach by sea attempted.  Now by the end of the film I had almost none of those concerns, that is not necessarily due to getting answers, but by accepting that these things did not matter.  Nevertheless, thinking back, these things bother me, and I very much want much more story and would sit through another 2 or 3 hours of film even if it nearly kills me.

Watching Annihilation is like watching a film where there is constantly something just in the corner of your eye, or just obscured from vision.  Everything looks far too alien to be real, and just familiar enough to be disconcerting.  Everything appears slightly wrong, just a little off, but never lingers long enough to put a finger on it.  It is absolutely visually spectacular and breathtaking.  The way Alex Garland played with light and color is sickening in the best conceivable way.  The way he set and broke the pacing absolutely destroyed any sense of time the audience had walking into the theatre.  As if that was not enough he made every last character unknowable and familiar, the creatures terrifying and amazing, the threats real and hallucinatory.  I have never been so overjoyed to have a director toy with his audience.  While I could absolutely tell that I was being manipulated, there was nothing I could do to stop it, it was watching a master at work.

The dynamic cast was absolutely trilling to watch, the way Natalie Portman, Jennifer Jason Leigh, Gina Rodriguez, Tessa Thompson, and Tuva Novotny worked together was amazing.  It was not until after the fact that it even registered that the leads were all female.  Strong dynamic characters that drove every frame of the film forward is beyond refreshing, but the fact that the leads are all female made very little difference, they would have been amazing characters regardless of gender.  I honestly only bring that up here because I was surprised when a friend mentioned that fact and it had not registered with me before.  I was simply so caught up in the film that those details did not matter.

Annihilation is surely the most innovative, and awe-inspiring cacophony of amazing filmmaking I have seen in the past decade.  I believe it will inspire new and incredible generations of films and filmmakers and will be the topic of discussion and debate for years to come.  I believe like it or love it, no one will be able to honestly deny that it is unquestionably brilliant.