I’ve watched a lot of movies in my short life. This is all because of my mom, she’s an avid film viewer. She showed me Pulp Fiction, Amadeus, Star Wars, Indiana Jones, and other movies that I shouldn’t have watched at the time because of my age.

When I was a kid I pretty much liked every single movie I saw. For me movies were an entertainment source mainly because I didn’t have a Super Nintendo or a lot of friends. So movies were always gold for me, I was just too young to pick up the trashiness, and filter it out of my life.

Now that I am older and I see through the bullshit. I look back at the movies I had seen back then I just break into laughter. I ask myself; “how did I ever like that movie?”, or “How could I even watch that without killing myself?”.

A good example of one of these movies is The Karate kid III. I fucking loved that movie as a kid (I STILL love his movie -Xopher). Daniel-san’s mission to become a karate master for the 3rd time with the usual obstacles. Obstacles including and not limited to:

I actually watched this movie a few months ago, Tears were shed and they weren’t tears of joy. 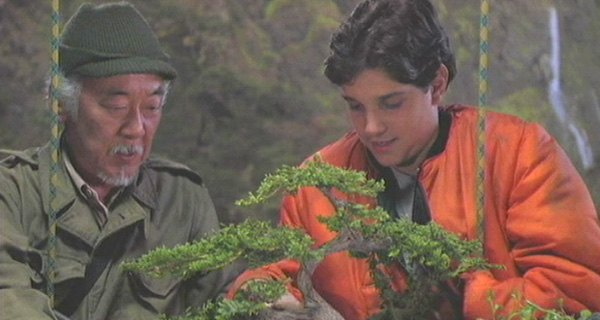 Miyagi-Sensei-San! I just realized something! This tree is at least ten times better than this movie!!

When I watched this movie a few months ago; I realized something, something totally logical but I was stupid enough to only realize after I watched it in my more mature years. Most movies I loved when I was a child are pieces of unrefined crap by todays standards, well crap by any standard. When I realized this, I looked at the ratings of some of the movies I loved as a kid. I was unpleasantly surprised to find at least a dozen movies that I loved, being totally trashed by review scores as low as 3 stars out of ten. A few of these movies were: Starship Troopers, Beverly Hills Cop 3, Three Ninjas (Don’t ask.), Small Soldiers, The Land Before Time 2, 3, 4, and 5.

I loved all these movies. Especially Beverly Hills Cop 3. But when I watched a few of these movies again, it was torture. Some parts of the movie or dialog didn’t make any sense even if I tried to put them in a different context.

I then asked myself, “How could any sane mind make any of these movies and actually pass it to audiences with his name on it?” If I worked on a movie as bad as Batman and Robin I would use an alias in order to hide my real name from the die hard fans that travel to your house to silence your stupidity. My alias would probably be ‘Iwan Tudai’.

I think people that try and make money by wasting the audience’s time with bad movies should be shot at dawn. This is my very honest opinion and if I was in any position of power, this rule would be enforced to its full extent. Seriously Joel Schumacher would not be alive, neither would Uwe Boll or Michael Bay for that matter.

Wanted dead or alive, Wrecker of a franchise

So after a while of watching assorted movies from the past, I realised something else, What I used to think was a shitty movie when I was young, could be a really good movie. For an example of this stellar logic look at Doctor Strangelove or: How I Learned to Stop Worrying and Love the Bomb. This is in my opinion one of the best movies ever put on film. If I was in a position of power, everyone who was in this movie would be knighted. Peter Sellers was the closest to that achievement by getting a CBE(Commander of the Order of the British Empire ), rest his soul.

Back to the point. The reason I bring up this movie is pretty simple. It is a very hard to follow and complex movie. It has three main story lines(all three with Peter Sellers in it as a different character). Even as a fourteen year-old I had no idea what was going on. Last year I decided to pick up this movie and watch it all over again. This time I realized this movie’s greatness. I watched it three times in three days and I loved it every time.

What this means is that a bad movie with a bad plot is of course easy to understand and therefore a good movie for the mind of a child. I’m not endorsing Starship Troopers as a good children’s movie but at least it is simple to understand for the young mind. In Starship Troopers case it’s a simple plot: Humans: good, Aliens: bad, shooting aliens: very good.

In a movie like Dr. Strangelove, the plot is more complex and very hard for the average child (or teenager) to make heads or tails of it. There are many more movies in this category, you have The Godfather but that’s obvious. The Dark Knight is another, it’s a 16+ rated movie for a reason, and I think a good part of that reason is the complexity of the plot, and the reasons of some actions taken. The plot and ethics of this movie is something that no child should ever understand.

If you have a child, just give him/her some craptacular or easy to understand movie. Though you should never refuse them a crappy movie that is made for their audience because you hate it. As long as they enjoy it you should too. Then again, you could also just give them a Disney movie and walk away. But that’s no fun.

If you are by any means not sure what to do, here is a easy test to use on your child.

If he/she likes this, then you might as well let them watch it to keep them quiet. But watch out! Hearing this movie is bad for your health. Watching this movie will make you sterile. Turn the volume down, turn away and do something else while you child enjoys themself.