Capcom has come to San Diego’s Comic-Con and so far have not disappointed the audience when it comes to news about their latest fighting game, Marvel vs Capcom 3. We have news of 6 playable characters confirmed to join the MvC cast and you will be surprised by some of the inclusions.

Yesterday, they showed a brand new trailer with 4 characters, see below:

It’s little surprise that Dr. Doom will be returning to the cast, and so will Chun-li, but both are solid additions to the roster. However, the biggest news here is the addition of the new characters Super Skrull, and Trish.

While Super Skrull was pretty much confirmed when Capcom released the teaser silhouettes with the initial reveal, Trish is a rather surprising addition. Both appear to be deadly in combat as the Super Skrull uses his shape shifting abilities to what looks like copy the Fantastic Four’s abilities, and Trish uses Dante’s Demonic Sword, with seems to have an emphasis on Arial combat. 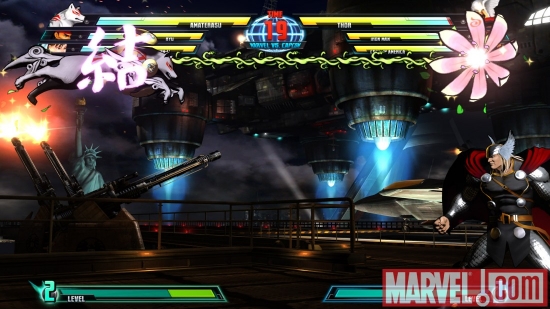 Today however, brought the announcement that Thor and Amaterasu will also be included as well. Thor is a surprise but not as big of one since he has a movie coming out next year, but Amaterasu is a shocking reveal.

Capcom was all too proud of Okami…proud enough to shut down their creator Clover studios. I don’t think anyone expected the goddess wolf to end up in the mix at all. I have yet to see footage of either combatant in motion so I cannot comment on their Fighting style.

This brings the total number of confirmed combatants up to 16 out of the expected 30.

Marvel Versus Capcom 3 is releasing next spring. Expect more news out of Comic-Con as the week continues, and leave your thoughts and comments below, or at the WPR Forums!

Don’t you miss the days of Confirmed for Brawl?

I know there is a name for Trish’s sword but I don’t remember.

S. Skrull having the Fantastic Fours Powers isn’t too surprising since the quartet will not be appearing in the game for undisclosed reasons.