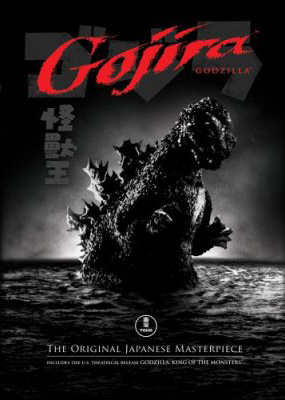 Gojira (or Godzilla for the sake of Microsoft Word) is a movie that in short inspired a nation’s creative mind. Let’s face it, there’s something about Godzilla that made him so special that he has become a giant-sized phenomena.

He has single handedly spawned over 30 films, multiple television series, video games, comic books, novels, and more over the last 66 years. Heck, the franchise bookends several Eras of Japanese Kaiju (Monster movies) and Tokusatsu (Special Effects Shows, like Power Rangers) movies, and has always been at the forefront of the genre.

Godzilla’s overwhelming popularity boggles the mind. I love the big lug, but I had to see what started this epically long and beloved franchise. That’s why I decided to take a look back at the first, the original, Japanese King of Monster movies that is Gojira.

So the story is, of course, that one day in Japan, a giant monster named Godzilla begins appearing and starts to ravage all it sees. Humanity desperately attempts to stop him but no conventional means are effective, so they have to find some way to stop him.

Yes…it’s the plot for most of the Godzilla movies, but since this is the first one, you have to let it slide.

As for the characters, there are really only a few characters in this film that aren’t extras or background characters, even then most of the leads are generic and one dimensional. You have the old Dr. Yamane, who just wants to study the beast and warns about how nukes are bad, Emiko his daughter, who is good at screaming and being empathetic, Ogata, a ship captain who is there to be brave and hunky, and finally Dr. Serizawa who is a mysterious doctor…who might just have a solution to the Big G problem.

Since this is a 1950’s horror/monster flick, I totally dig the set up, even if it is a little flat.

The ending, unfortunately feels like it comes out of nowhere in the last twenty some odd minutes, and it is rather upsetting. It’s disappointing for two reasons: One, it’s completely by the book, namely you’ve seen this ending a dozen times before, and two it is an explosion of symbolism. This symbolism is so thick it absolutely destroys the rest movie.

I don’t generally care for movies that delve to deeply into symbolism, I find that the message either comes out too overbearing or too convoluted. It’s rare you can find a movie that strikes the delicate balance between the two. To be honest, Gojira doesn’t do it all that well and with the true message being spelled out right at the ending. There are times however, when they aren’t blatantly talking about it, that the film feels quite powerful.

When Godzilla attacks the city, and leaves it in nothing but flames, it actually did make me think about WWII. Since I know the history about the things we did to Japan like using Incendiary bombs, seeing the Tokyo in flames, I was instantly brought to that. I can’t imagine how powerful scenes like that must have been to the Japanese back in 1954. Gojira may not always have a deft hand, it does have non verbal symbolism that is actually really full of impact in the end.

The effects are… effective, but due to a combination of 1950’s limitations and the black and white setting they can be more than hard to make out at times. 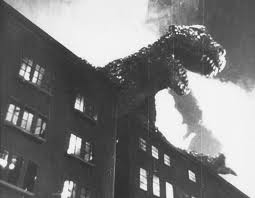 When Big G. unleashes his atomic breath for the first time it looks more like ice breath, just because it’s kind of hard to make out what’s happening.

There is a sense of scale that is totally missing from the film. Godzilla has several differing sizes in this film that he switches through, seemingly at random. While this is totally hilarious, it does take you out of the film if you’re trying to take it seriously. If you aren’t taking the film at face value, it totally increases your enjoyment, as it’s par for the course in a 50’s flick like this.

Most of the musical score feels stock, and cheap. Which of course is to be expected, so it actually sets the mood quite well. However, I must give shout out to one mournful piece that is truly captivating and the stand out for the movie which used a choir which eerily reminds me of church hymns which is truly the perfect piece to play in the wake of Godzilla’s destruction. 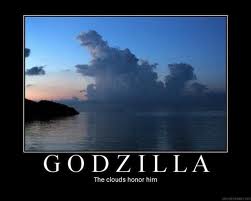 The ultimate question one can ask of Godzilla, is how does it hold up? The answer is, surprisingly well. Sure, at times it can sink into the realm of classic 1950’s schlock and the ending is almost as out of left field as it is brief, but this film is just plain good.

I wouldn’t recommend seeing this film entirely seriously, feel free to crack jokes at it, but afterward it can be a pretty cool segue into a serious conversation. This film is absolutely drenched in meaningful symbolism for the atomic age, and if you think about it, is still very potent.

How exactly did this dark sincere warning of the future turn into a massive franchise that culminated with an amazing flying Godzilla Jump Kick, Godzilla using his breath as a jet pack, and a crappy 1999 American version? I’m not really sure, but I do know one thing…Gojira is a dark, intense joyride that will leave you thinking, and you should see it today.

Gojira is available on Blu-ray and DVD. The film is also available for instant stream from Netflix for the time being.

* Near the end of the film, the movie point blankly tells you the moral of the story, aka nukes are bad, and the more we experiment with them, the more likely it is we see more godzillas. In the real world we haven’t had monsters but we have seen a massive leap forward in the development of technology. Could the Internet be the real life equivalent of Godzilla? Answer Probably.

* As for The American version of Gojira, well I haven’t seen it. However since the only real difference is that they add an American character for no reason, I don’t think I need to.

* Also because of the limited million dollar budget, The Japanese army is caught on several occasions fired exclusively 2 machine guns at the unstoppable monster. Those poor souls, If only they had three machine guns.

* Like seriously Clover field has nothing on this guy, but I’m still all for a Vs film.