Trick ‘r Treat is the kind of movie you probably will never watch. Being released direct to DVD nearly two years ago, with boring unnoticeable cover art, and a stunningly bland forgettable name, it honestly feels like this film was designed to not stand out from the crowd. My sister won this in a costume contest 2 Halloweens ago, and we didn’t watch it until this January. This film is an outright failure at standing out, and there is little to no incentive to watch this movie on face value outside of the fact that Anna Paquin of True Blood, and X-men fame co-starred in it. That being said Trick ‘r Treat is a surprisingly good popcorn horror flick, that’s better than I could have ever expected.

The story of Trick ‘r Treat is a simple little thing. It is basically an anthology of tales that revolve around one small towns Halloween night. The whole thing reminds me of some of the stronger material on Tales of the Crypt, or Are you Afraid of the Dark, as the tales themselves are pretty standard horror stock in themselves, but fully entertaining in their generic-ness. For a few of the stories I was actually stunned by the twists the movie comes up with, and for the predictable world of horror I have to say that’s a pretty big compliment. 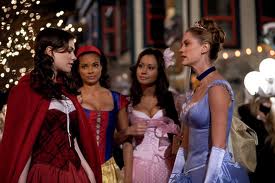 The big issue I have with Trick ‘r Treat isn’t the stories themselves, but instead with how they are framed and presented. Most of the story lines introduced quickly in succession early on, only to be dropped for twenty minutes or more at a time. While some of them overlap a tad bit, one would expect the stories to be more intertwined, but they aren’t so it just leaves storylines dangling, on mostly uneventful notes. It’s jarring and annoying, and only serves to bog down the pace of the film.

Eventually as the movie wears on it finds its focus and flows better, focusing on one story at a time instead of jumping around, but the film should have been focused though out, because as it is it doesn’t make a lot of sense. 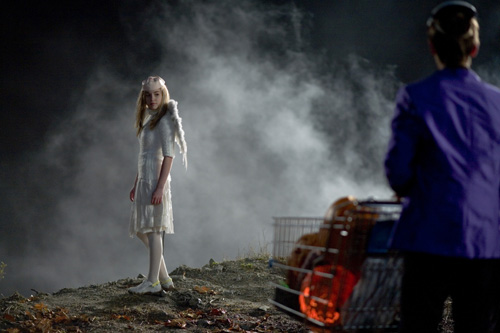 The film surprisingly has a lot of really strong performances from its cast. One wouldn’t be surprised in a budget genre flick like this to have little to no recognizable talent, and there by suffer for it in quality; however this film pulls really great performances out of mostly no name talent, and child/teenage actors, which is impressive and deserving of praise.
The Direction is very competent and logical though most of the film. The Movie revels in Orange and blue tints that perfectly set the mood and it make the film a sight to behold. However at several points the film uses a rather confusing comic book motif. Using a comic book style narration captions to detail “Earlier”, and for some reason for two kill scenes near the beginning and the end of the movie. These sequences just seem out of place, and while distracting, don’t really break the movie that much.

Trick ‘r Treat is also a movie that wisely strays away from the use of CGI, and rely solely on practical effects, a trait that is becoming increasingly hard to find in cinema these days. These effects are neat in their practicality, and come across with a genuine feel; however they really aren’t all that scary. 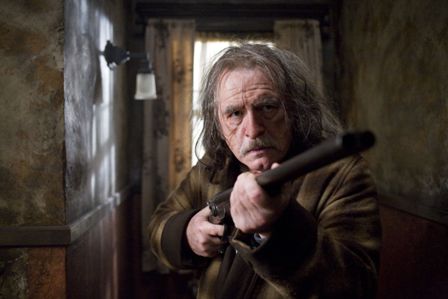 Trick ‘r Treat as a whole is not scary. It can’t even be defined as Hollywood scary, in the terms of exchanging actual terror for gore or hardcore violent, as most of the movie is surprisingly scaled back in these departments. While there is some “disturbing” imagery, and violence, a lot of it is either after effects or off screen entirely. If not for several key (and mostly unnecessary moments) of R level sexual content this could easily have been a PG-13, and would have been a fun horror movie that the whole family could have enjoyed. However because of this odd mix up, the film loses a lot of potential for a larger audience. It in a lot of ways this is the ultimate failing of the film, as it’s too inappropriate for a family and not really scary enough for a lot of the adult horror audiences.

In spite of Trick ‘r Treats flaws it really is a movie deserving of your time. The stories it has to tell are all fun, and enjoyable in their own right, even if none of them are truly frightening. Where the film falls short of instilling terror, it more than makes up for it in entertainment value. Trick ‘r Treat is a great movie to watch at Halloween with an older audience. Watch it with a few friends, and you will laugh, joke around, and just have a seriously great time.

*Trick ‘r Treat is currently streaming on Netflix, and can probably be found at your local Wal-Mart in the 5 dollar DVD bin.
* Ah Anna Paquin, you and your cute yet unsuppressed southern accent is so out of place in this movie.
* Surprisingly despite its limited screenings to critics it actually has quite a strong amount of critical acclaim from some big name sites out there.
* Yey another review that should have come out like last year!